Kanwal’s Easyflex Series Seismic “EFSVC” Connectors are one of the most effective ways to compensate for thermal expansion or the unpredictable pipe movements encountered during seismic activity. Series “EFSVC” Flexible Connectors are seismic connectors engineered to absorb movement in all directions. The unique “EFSVC” design places the flexible leg at 45 degree angles to the pipe run, even allowing up and down movements.

As opposed to bellows expansion joints, Kanwal’s Easyflex Series Flexible “EFSVC” Connectors impose no pressure thrust load on the piping system, eliminating the need for thrust anchoring around the connector. Simply use pipe alignment guides in conjunction with the seismic “EFSVC” connectors to direct any motion into the connector.

Why the “EFSVC” Connector and not a “Loop”? The “SVC” Connector uses (2) 45 Degree elbows and (1) 90 Degree elbow for a total of 180 degree in pipe change, where as the “Loop” is based on 360 Degree pipe direction change. For all motions, each hose leg of the “EFSVC” Connector moves in angular directions, minimizing weld attachment stresses. Weld attachment stresses are a high cause of failure on deflected braided metal hose connectors. The “EFSVC” Connector configuration also minimizes intrusion to adjacent spaces, minimizing pressure drop with one 180 Degree change of direction, compared to the 360 Degree change of direction with the “Loop” and allows nesting without adding pipe or flexible connectors.

“EFSVC” Connectors can be constructed to accommodate 2”, 3”, 4” or greater movement in all planes. The flexible legs are calculated to provide at least 2000 cycles, far beyond the life of all previous seismic connectors available on the market. Normally, the “EFSVC” Connector is installed with the 90 degree return elbow hanging down, but can be installed in other positions as long as the elbow is supported. Also, “EFSVC” Connectors can typically be nested without alteration of the loop. In tight centering situations, V-Loops can be nested by using progressively longer pipe extensions at the base of the connector.

Kanwal’s Easyflex “EFSVC” Connector can be installed in a variety of positions.

Due to the inherent design of the “EFSVC” Connector, they may be nested in most cases without having to alter the standard construction. In tight centering situations where loop flanges would interfere with each other, it add a center spool piece at the bottom of each connector. Please may be necessary for the factory to specify sequence of pipe diameters and corresponding distances between pipe center lines.

In expansion compensation situations, the “EFSVC” Connector can be installed pre-compressed or pre-extended only if the full range of motion will be encountered in one direction.

If shipping bars are attached to the connector, they should not be removed until after installation.  These bars are lightly tack welded to the loop to maintain the proper length until installation and will break-away in case of seismic activity.  If the “EFSVC” Connector(s) are designed and installed to compensate strictly for expansion, then the shipping rods should be removed after installation.

For steam applications, a drain port and plug shall be specified and factory installed into the bottom of the 90 degree elbow to allow condensate to be drained. An alternative position for steam service is with the loop inverted, with the 90 degree elbow pointing upward. In this way, the “EFSVC” Connector will drain naturally into the surrounding piping. See the “Position & Support” section “Horizontal – V Straight Down”.

Note:  The figures above reflect the total force required to deflect the “EFSVC” Connector its full rated movement, pressurized to 10 Kg/cm2 for ½” through 8” and 5 Kg/cm2 upto 12”. 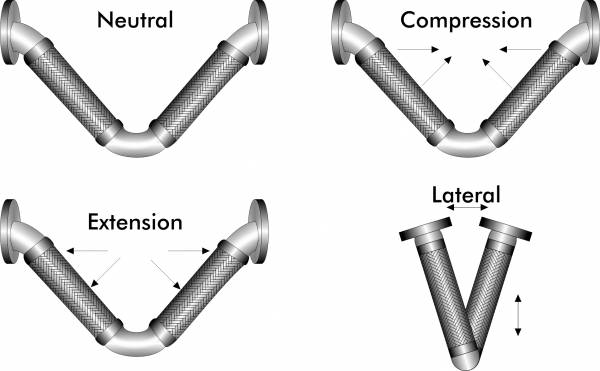